Halloween is coming up and we're getting ready for it. Maya wants to be animal from the muppets. Here favorite muppet. 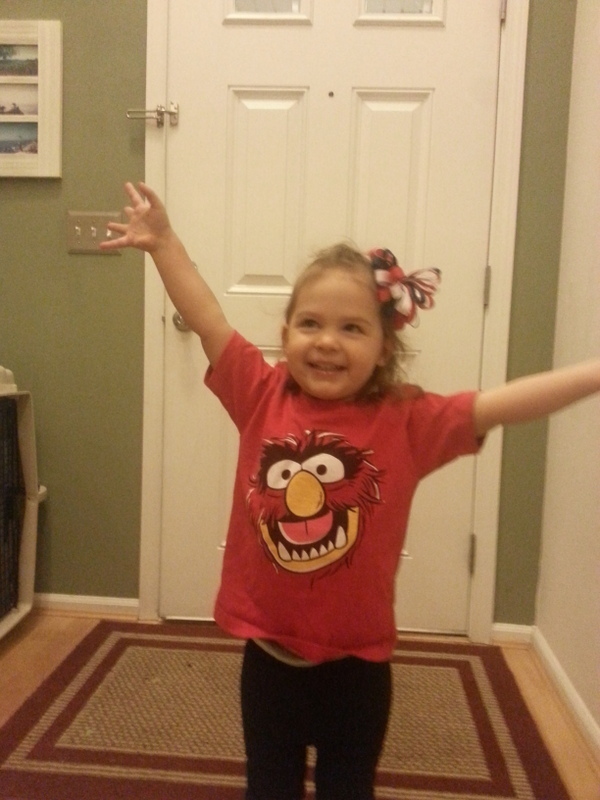 I know I could probably buy one but I figure there are a lot of creative, crafty folks out there. Hit me up with you're best ideas. We already have a pair of drumsticks. :)

Disclaimer: She's 2.5 and has also stated that she wanted to be a scarecrow and cookie monster. By the time Halloween rolls around we could be doing something completely different.

She's consistent with what Mommy and Daddy should be. I'm supposed to be zombie and mommy a brain.

I can't believe its been almost two months since I've posted anything. Winter is pretty much here in Seattle and I have so many fun events we did in the summer to catch up on. We even had an awesome visit from Grammy!  But those posts will have to wait.

This week has been filled with Team Castaneda being sick. You and Mommy started getting sick last weekend and it finally caught up with me later in the week. Sheesh. I feel like maybe we should be quarantined or something. But do we let sickness stop us? Heck no, we still troop on. In all fairness you and Mommy handle sickness much better than Daddy. In fact we might be lucky if I make it through this post. I feel a little sore throat coming back. It's a little touch and go right now.

On Monday it was just you and I. I stayed home from work to hang out with the little sickie. (It was probably the start of my infestation) The weather was nice so we were able to get a few goose walks in. I love these pictures of you in the leaves. You were kicking, jumping and playing in them. You were having a blast! Your Aunt Linda has a great picture of your cousins Adam and Maria playing in the leaves when they were younger. This reminded me of that. I wanted to try to capture the same leaf throwing enthusiasm as Maria had in her photo shoot but Stella barely let me snap these few pics. 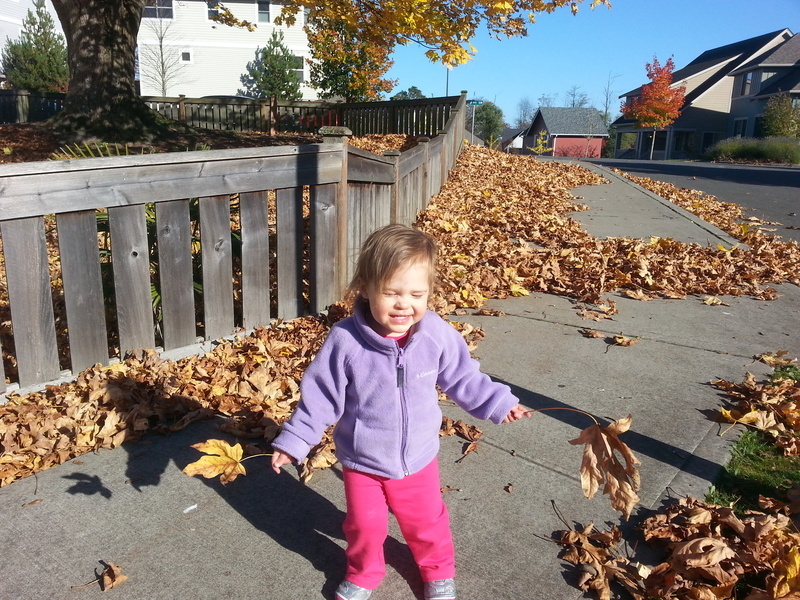 When you woke up from your nap you were whining for Mommy. You found this picture in my office and carried it with you the rest of the day. You even had me set it up while we at lunch! It was our little family lunch with a 2d Mommy. 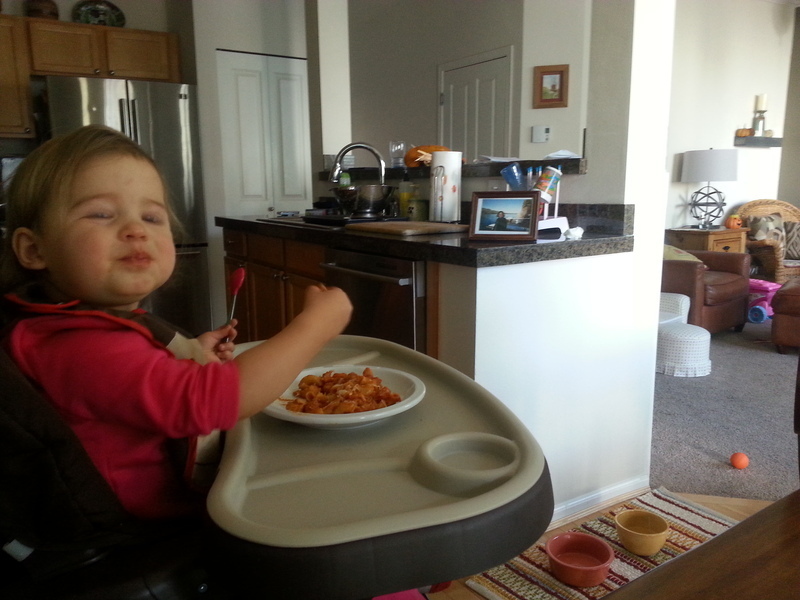 But other than that, Monday was pretty much music and rest day. You LOVE to listen to music and watch music videos. You are even starting to make your own opinions and are requesting music daily. Its a little insane and If I'm being honest its kind of taxing sometimes. I'm saying this and I like the majority of the music you ask for. Kids are just relentless with this whole "more" and "again" thing. I guess it could be worse but I digress...

Thursday was Halloween and it was your first trick or treat night! We didn't get many good photos but you had a blast. First you and Mommy came to my work party downtown. This was your first taste of walking up and down the cube farm isles with your little bag saying "treat!" and people putting candy in your bag. Wow. Mind blown. You were pretty into that. We made it back home despite Seattle traffic's best effort and did a little trick or treating in our neighborhood. That was awesome. I haven't seen this many kids out trick or treating since I was a kid. You loved going to people's houses and saying "treat!" We only hit a block or so and went home to hand out our own candy. You kept pillaging our candy to give out, stealing all the lollipops saying "Pouch!" But you were good with sharing and loved seeing all the kids coming up saying trick or treat. You would get all excited and we tried to get you to say "Happy Halloween!" but it kind of came out "Happyeen!" Its ok. The spirit of your message was there. Like I said we didn't get any really good pics but here are a few. You went as a watermelon even though most people called you a strawberry. I tried to let mommy dress you as a baby zombie but she wasn't going for it. No one would have confused a strawberry for a baby zombie. I'm just saying. 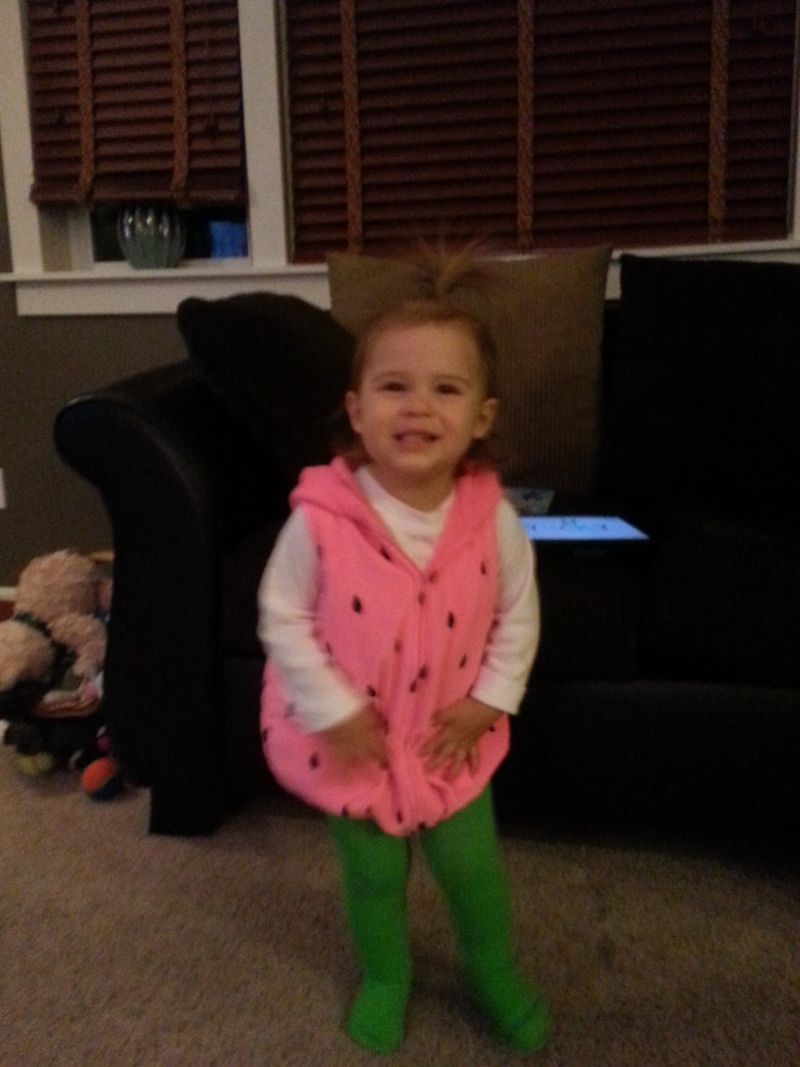 On Friday I was full blown sick so I was home with you again. We had to run some errands but made a quick pitstop at the toy store. This was the first time I've seen you play with a little doll house. You played with this thing for nearly 30 minutes! I thought I was going to have a super tantrum on my hands trying to get you out of there. Luckily I was to bribe you on leaving the store in anticipation of a snack and some "Fang!" 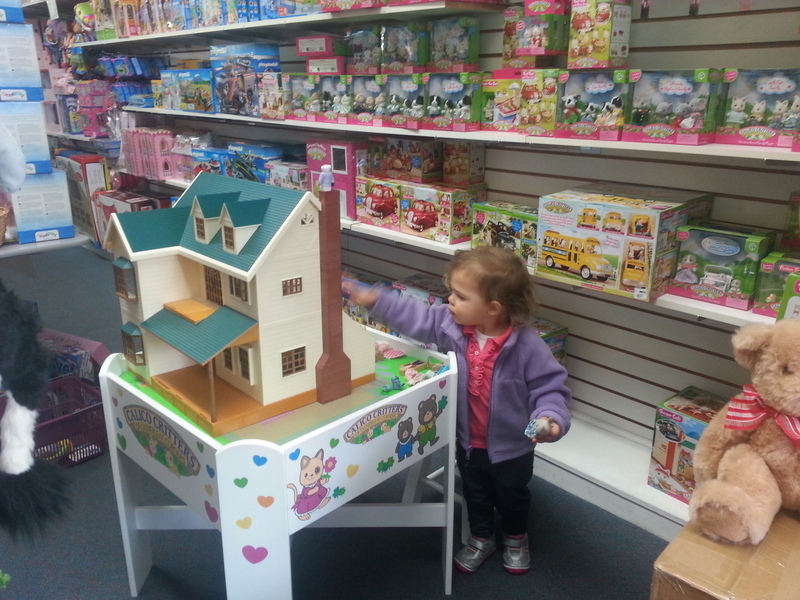 Today you and I went to a kids class at the Seattle Symphony. If there is one thing I'm learning in becoming a parent is that you really have to lose any reservations about being and acting silly. One could argue that I lost those reservations a long time ago but those are stories are for another time. Wait. You'll never hear those stories. Just know that I was a perfect kid, teen and young adult. There I go losing the thread again... While the class was silly it was awesome getting to play with some of the instruments afterward. Your favorite was the Piano. Maybe we'll have to have Grandma Castaneda show you a few chops. (You'r favorite also could have been sitting at the kids desk and coloring. Who really knows these things) 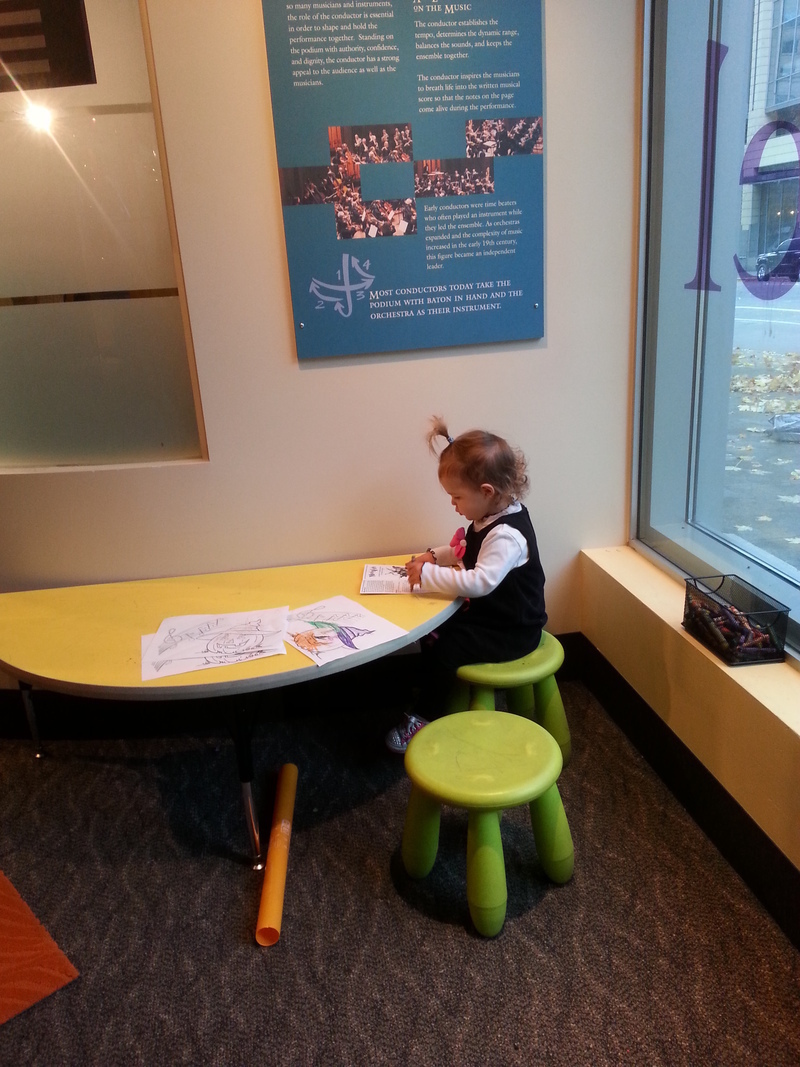 Later on, Mommy was attempting to go through some of your old clothes to put away those summer outfits and prepare to get rid of some of the clothes that you've outgrown. Its a very bittersweet time for mommy right now. While the cleaning out of the old is good, the fact that you are growing into this little kid more and more every day and not a baby anymore is kind of shoved in our faces a bit. Luckily we don't have time to get too sappy because you're pretty funny. You saw some of your old clothes and wanted to put them on. So we helped. I think this might be a total of three outfits on and PJs playing a fourth layer as a cape. 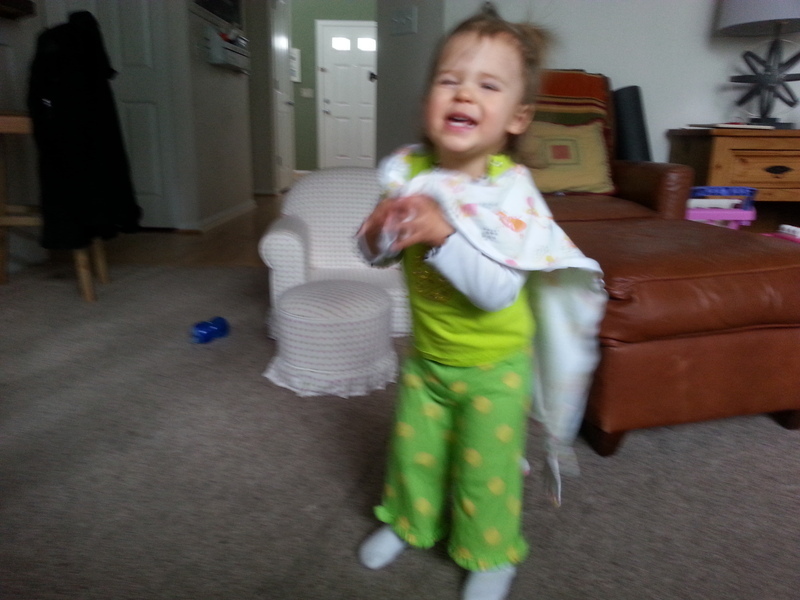 Despite all of our sicknesses it was a pretty good week for the family. We ended today with a little name that tune fun. Like I said, you love to listen to music a lot and often ask for certain bands / songs by name. Well at least your names and how you identify them. I noticed one day when I was singing a red fang song you quickly yelled "Fang!" I was impressed that you recognized it from my out of tune rendition. So I sang another and you nailed that one too. So I give you in all its glory, our first video recording of the daddy and Maya, name that tune game. (Disclaimer: Yes I know I'm all over the map when it comes to being in tune. See the note above about losing all reservations about being silly) (Disclaimer #2: The reason I don't have any facial hair is because its Movember. I have to start the stache from scratch)

(If that video doesn't work, see it on youtube here!)

Well Mai, that's about a rap for today. I have so much more to catch you up on. So many milestones and fun events. Just know this; you are awesome, funny and too cute for words.

With love, love and more love,