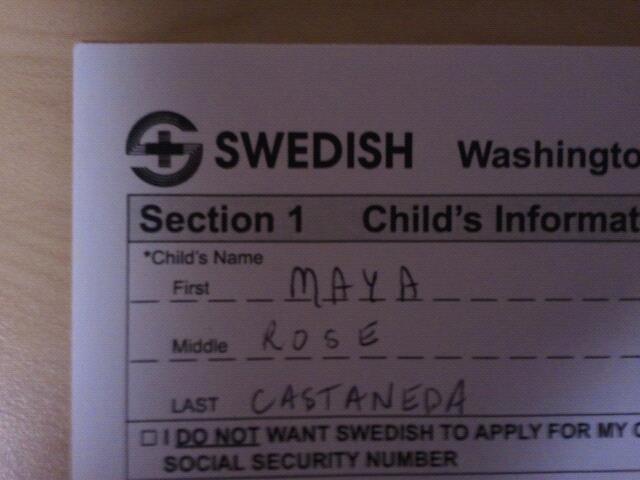 In case you are wondering why you are named Maya Rose Castaneda, here it is; We pulled it out of a hat. That’s it. It was in a big hat with many names. In fact, Foster helped sniff it out. Totally Random.

Ok not really but by the time you are reading this you already realize that one of our hobbies is “Mess with Maya.”

Let’s start with Castaneda. Technically we should use the “ñ” (énye) in place of the “n.” So Castañeda is your last name. Pronounced Kas-tah-nyed-(th)a. The “th” sound is very subtle. Don’t worry; it’s ok to use the “gringo” version. I have all my life. It’s just nice to know the authentic version.

Your middle name is Rose. Rose was the name of your Great Grandmother on your Father’s side. It was your Grandpa Carlos’ Mother’s name. In fact, it has been a tradition for the first born girl to carry on the name Rose in some shape or form. (Thank your cousin Maria for that tidbit) So that means that you are related to about 1,032 women named Rose. That number is just an approximate. I’ll gather the factual data later.

We almost settled on a different version of Rose: Rosemary. This was because when we first moved to Seattle against your mother’s will, (she was shackled and forced to move) one of the first things that made Seattle ours was all the wild rosemary. We would go on walks in our Magnolia neighborhood and your mother would make me steal branches of rosemeary to help make the scary place we lived smell better. In the end, you’ll always have Seattle in you no matter where we are and Rose just sounds better than Rosemary with the full name.

Maya, Maya, Maya. Where did Maya come from? Your mother and I struggled with your first name for some time. In fact, while your mother was pregnant and before we found out your sex, I was convinced you were a boy. I told her I had a gut feeling about it. This is probably why Daddy doesn’t gamble that much. A gut feeling probably just means I’m hungry.

Anywho, I had your name if you were a boy: “Jupiter Castañeda”

I’ll give you a second to revere in it’s awesomeness.

So that name would have caused a lot of controversy so it is probably better for everyone that you came out a girl. But with that said, we wanted you to have a name that is all your own.  A name you can own. A name that is strong and proud. Maya won out over a list of many names and as I’m writing this you are proving to be indeed a perfect Maya, even at 8 days old.

Here is a list of some of the other contenders:

So that’s it Maya. It was a long journey to get there but we believe Maya Rose Castañeda holds the power that you possess. You have a great role model in Maya Angelou that shares your name but plenty of other strong women who surround you in your every day life, especially your mother. Time to rule the world and bring peace to all the planets.

If nothing else, we wouldn’t have the wonderful song that Grandma Diane made up for you:

(To the tune of Copacabana as made famous by Barry Manilow)

Her name is maya, Maya Papaya.