Today is a sad day. We had to say goodbye to our Goosie today. She was and will forever be the best dog in the world. It sort of breaks my heart that you won't remember her but you two were buddies. You loved our Goose. Whenever we talked about our Family I would say "... and Mama, and Daddy and Maya!" You would always respond with "AND GOOSE!" She was a part of our family. This is my first memorial to her.

Why Goose you ask? Well that named evolved. I better get this documented before we forget.

So her name is Stella. We brought her home from a rescue in Dublin, Ohio. Mommy and I first started dating and I wanted to show off my mad guitar skills so I took Mommy to a music store. I know, sexy right? Well next door to this music store was a pet rescue. We popped in and talked about getting a dog. We had just started living together within a few weeks and I hadn't had a dog in my house since I was four. This was very spontaneous.

We almost got this dog called Woody. We'll have to tell you about that but thank goodness we didn't get Woody. As we were on our way out of the store they just put Stella in her crate. Her and her sister. 8 week old little mutts. She couldn't have been any cuter. She was just sitting in there, not much expression and her sister was resting on her. We got her out and took her to the "get acquainted area." Mommy's words, and I quote, "I'm worried she doesn't have much personality." That could be the most wildly inaccurate statement ever made. Ever. Her name was "Minnie" at the time.

We set her down. She pooped. Peed and went total bonkers. Bouncing off the wall. She was crazy. We took her home within a few minutes. She was so tiny. I wish I had pictures to show you how tiny she was. That was so long ago it was before cell phones had cameras. That means she had a good doggie life, Mai. She lived out a technological advancement! She followed that trend for the rest of her life. Whenever we took her to a dog park and we took her to many; She had to pee then poop before she could start playing. That dog was crazy. She had so many funny quirks. I'm going to miss her so much Mai Tai. We have so many more great stories about that crazy dog. We'll share them with you over time. But really just know, she was the best dog in the world.

We took her over Grandma's and everyone was outside enjoying the summer. We had to name her but nothing felt right. Grandma's neighbor, Randy said "Stella!" And there it was. Stella.

From there it was just Stell for awhile. Then Stell Bell. Then just Bell. (No, not after those dumb vampire movies) Stellie Bellie became Bella Rus (Bellarus) and then just Rus for a while.

From there Rus Goose just became Goose and the rest is history.

Every now and just yell GOOSE! as loud as you can and smile! She would like that.  That is how we greeted her for the last 4 years of her life.

She just had her 14th birthday a few weekends ago and we took her to the coast. She loved to eat the waves and play on the beach.

Goodbye our sweet Stella Mae. Say Hi to Foz Bear for us and go get those waves!

With all my heart, 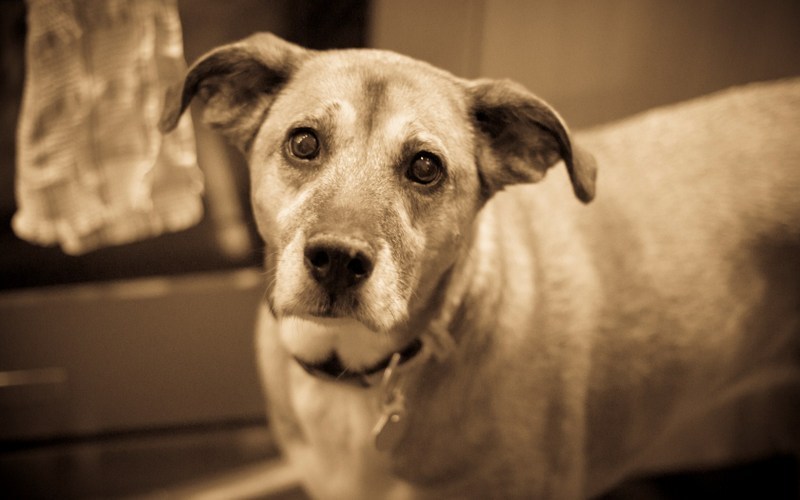